The Integrated Lighting Campaign hosted a webinar about participant recognition. Watch this webinar to learn how to utilize ILC resources, request free technical assistance, and get recognized for your efforts to adopt advanced lighting systems and/or integrate your lighting with other building systems to deliver added value. During the webinar, panelists reviewed the newest project categories and shared what you need to include about your project(s) in order to be considered for recognition.

DOE released a case study for the Tinker Air Force Base. By replacing the existing lighting with LED fixtures, this project saved more than 60% energy compared to the existing technology. This is consistent with savings of converting either fluorescent or high-intensity discharge fixtures with either new LED fixtures or retrofit kits, which typically result in at least 45% savings. The lighting controls saved between 8-23% compared to the LED baseline. Because LEDs are very efficient, the new LED baseline uses less energy. As a result, the 20%+ savings does not result in sufficient savings for a reasonable payback. However, using lighting controls to control other building systems can make the lighting and control system more cost effective.

DEADLINE EXTENDED TO MARCH 29. Each year the Integrated Lighting Campaign will confer recognition for exemplary projects submitted by Participants, and for programs, incentives, and/or support to the ILC by Supporters that help accelerate the adoption of advanced lighting and/or the integration of lighting systems within buildings. Information about recognition categories is available on the ILC recognition page. Participants and Supporters of the ILC may now submit their nominations using the ILC website's recognition form by March 15, 2021. If you haven't signed up for the ILC, you may do so on our join page. It's easy and it's free.

The ILC is designed to help facility owners and managers take advantage of savings opportunities and benefits of advanced lighting controls and integrated lighting systems.

The Next Frontier in Lighting: Getting Connected with the Integrated Lighting Campaign workshop is now available at the Better Buildings Solution Center.  View all the recorded presentations and materials from the 2020 Better Buildings, Better Plants Summit. 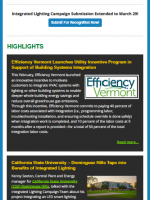